The Renaissance made new demands on the sound of harps. After three centuries of relatively constant method of construction, the rapid developments in music demanded a new model of harp with a wider range of strings. At this time Italy was setting new standards 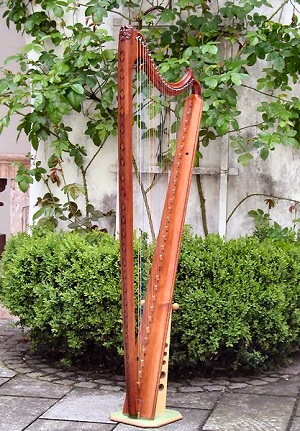 The only Renaissance harp still in existence, probably from Italy, is to be found in the Instrument Collection of the Museum of Art History in Vienna.

Original copy, carving with leaves and a faun. Body with elliptical cross-section and rounded banding along the edges; bray pins. Very good braying sound thanks to the long bass strings. 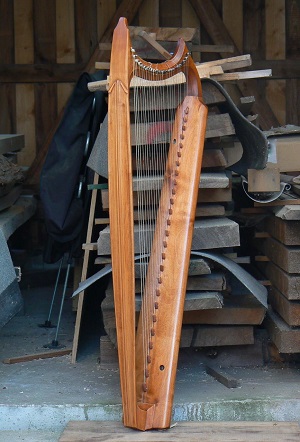 The so-called Wartburg harp is one of the few surviving instruments from the 14th century. If you visit the Wartburg in Eisenach you can see this harp in the original. For various reasons the harp is attributed to Oswald von Wolkenstein (1377 - 1444) and could also be called the Wolkenstein harp. He is known from his often bawdy song manuscripts that have survived, and there are also many anecdotes told about his life. He is said to have been taught harp-playing by magic.

The Wartburg harp is one of the most beautiful original instruments that have survived. My reconstruction of this harp is handcrafted after the original, with great attention to detail. For example, on request the alleged seal of Oswald von Wolkenstein can be inlaid in the front of the pillar, or stylized petals of water lilies and the letters WANN can be applied. The certosina (marquetry) decoration is a later addition.

I do not make a student version of this harp. The most suitable alternative is the Memling harp.

The few surviving iconographical depictions of harps in the Renaissance reveal a non-standardized range of shapes and a variety of decors. Unfortunately only a few original instruments have survived. My reconstruction is based on a harp in the Hessisches Landesmuseum in Darmstadt. The shape of the frame and the flat soundbox with its three pairs of drilled soundholes and its braypins lead us to believe that the harp was made in the region of today's central Germany, around 1630, the time of such great Renaissance composers as Johannes Eccard 1580-1611 and Heinrich Schütz 1585-1672. Both these composers left a wealth of vocal and instrumental music, that also made use of such harps as can be seen on the engraving of Schütz and his singers in the Dresden Court Chapel in 1620. In the background a harpist can be seen with a diatonic harp, accompanying the singers. 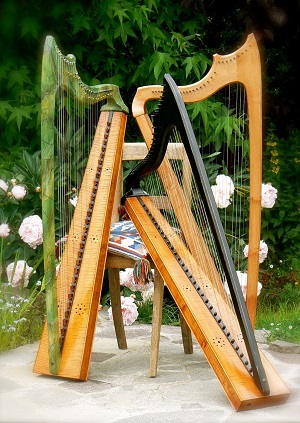 The instrument I build has historical semitone levers in the standard version and can be supplied with braypins on request. The clear tone makes this an all-round instrument: It's not surprising that this compact and robust harp is popular again today as it was in the Renaissance. I can offer numerous different decors, from plain and unadorned to a richly carved and painted version. You can choose!

Late gothic harp with 3 rows of strings, dated around 1530

From a painting in the Collection of Paintings at the Museum of Art History in Vienna. The artist shows a convincing illustration of a gothic triple-strung harp. 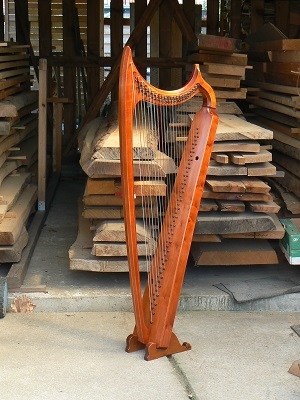 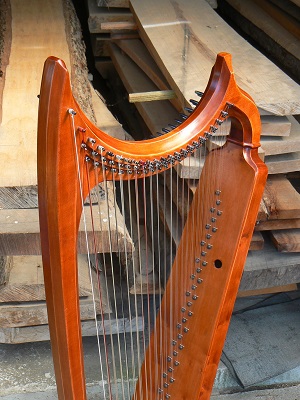