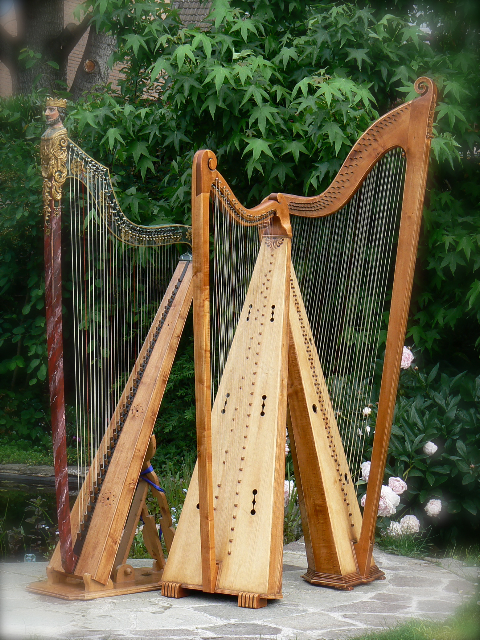 When Monteverdi started to write his operas it was high time for a fully chromatic harp to take the stage in the music world; either double-strung or with three rows of strings. From 1560 onwards the harp favoured in Spain was the double, cross-strung harp. And in the German-speaking regions around 1680, when opera and public opera houses were becoming popular, a double-strung chromatic "David's harp" developed, with braypins on all strings.

From the 16th century to around 1750 this was a very popular instrument on the Iberian peninsular, and also inspired the South American harp. The full bass sound coupled with a well articulated descant give this harp a stunning tangibility, even 300 years on. 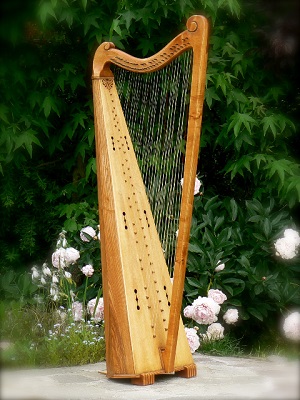 After the original instrument by Pere Elias around 1704. Corpus (soundbox) with cross-strung arrangement of strings, with a plain or turned column, made of walnut or ash. If you would like more decoration, I am open to special requests. 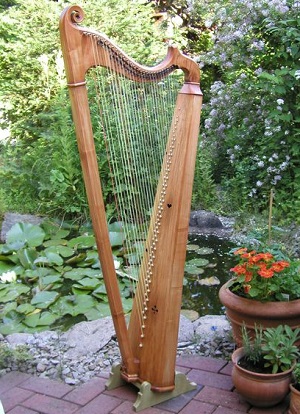 This reconstruction of an Italian harp of around 1550 is based on iconographical depictions of harps from the second half of the 16th century. The sound board is still hewn from a solid piece of wood, with an elliptical cross-section, as on a mediaeval harp. The soundbox has five ribs and the column is nicely decorated with a top curl. 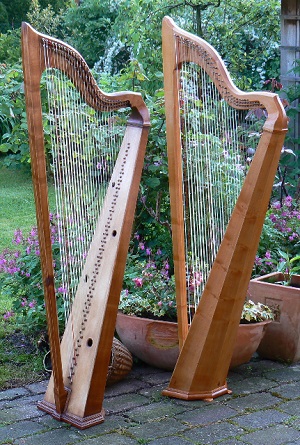 Small Italian baroque harp with three rows of strings, fully chromatic.
With a pillar height of only 156 cm this type of harp was very popular with the musical enthusiasts of the Italian bourgeoisie. Even today this harp is a favourite, not only due to it clear tone and sound but also because of its light weight and portability. An ideal combination.
Draw up your individual design with me for your own personal Neapolitan triple harp.
On request this instrument can also be supplied as a double-strung harp.

Listen to this sound sample from Kateřina Ghannudi

Two large Italian triple harps have survived from the first half of the 17th century, a time when a large chromatic harp had to be be able to hold its own in an operatic orchestra. The string distance on the 'supersize', highly decorated Barberini harp, originally made for private concerts for the Barberini family, is regarded as problematical for opera performances in the form of an authentic reconstruction. In the case of the Bologna triple harp on the other hand, it is doubtful whether it has been preserved in its original state and it has constructional weaknesses.

Despite these reservations both instruments are representative of the time they were made and above all they provide evidence of the types of wood used, the construction of the corpus and the compass of this kind of triple strung instrument.

In the painting dated around 1630 entitled "The artist and his family", the Italian painter C.F. Nuovolone depicts a large triple harp (see above). The scene illustrating a culturally and musically educated family in the early baroque period has been a great inspiration for me.
In my reconstruction of the Nuovolone harp I have brought in all the recognizable fine details in the painting. The soundbox construction and the types of wood used are based on the surviving "Barberini" and "Bologna" instruments. 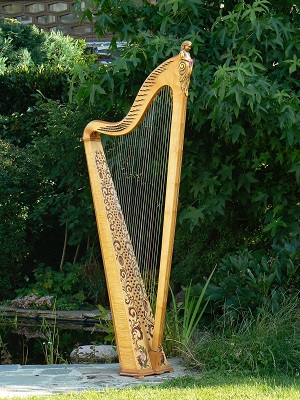 The Nuovolone triple harp has been brought back to life through my reconstructions and its richly colourful sound is highly praised by harpists and international early music ensembles. My harps are the preferred instrument for concerts and performances of baroque operas at large music festivals such as the Salzburger Festspiele, Utrecht Early Music Festival, Boston Early Music Festival and the Glyndebourne Opera Festival.
I shall be pleased to plan and design your own individual Nuovolone harp. This way you can be sure of a highly artistic, hand-crafted and unique instrument.

Domenico Zampieri lived in Italy from 1581-1641 and was a well-known painter and instrument maker. It is this fact that leads us to assume that his depictions of harps are authentic and can be viewed as a well-founded source of information for reconstructing historical harps. His painting of King David playing the harp can be seen in Versailles Palace: Close study of this instrument revealed that it is a medium-sized triple harp with a range of C - d'''. The harp does not belong to the group of later, larger instruments with a string range from G' in the bass to e''' in the descant. 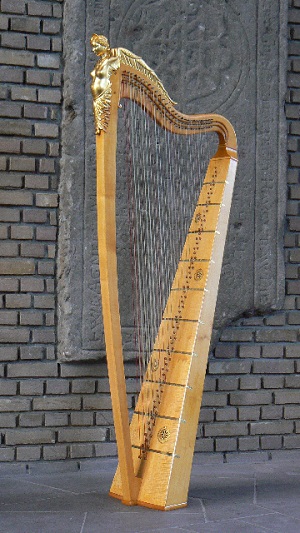 My reconstruction makes use of all the information revealed in the painting, and the result is an instrument with the typical bright tone of the period around 1600 when this harp was originally built. 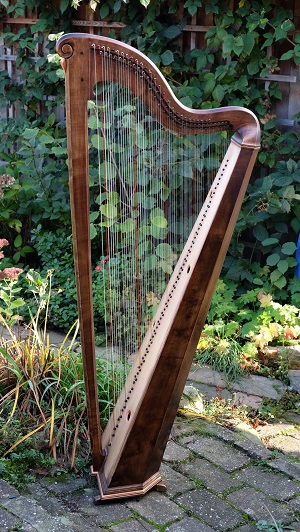 After receiving many requests from my customers for a light, easily transportable triple harp with the same string distance as the large Nuovolone harps, I developed a new model. It was essential for my customers that the harp should be able to transport its sound well even in difficult acoustic situations such as in modern theatres built in the 1970s and 1980s.  In addition the instrument was to be smaller than the original Nouvolone model to facilitate travel and flying. Iconographical depictions of such smaller harps can be found for example in church paintings. It was an ideal justification for designing an instrument specially for my opera clients, hence the name OPERA. 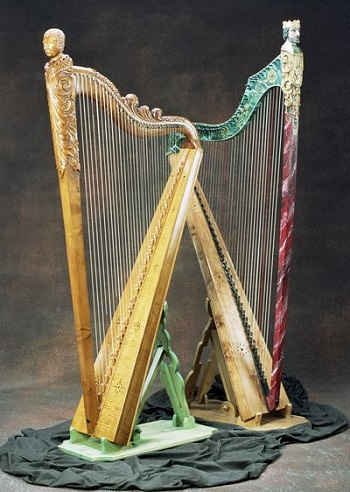 This harp is a lesser known model of a double-strung chromatic harp, which has its origins in the German-speaking areas of Europe around 1700.

In my research I have re-discovered more than ten harps based on the same principles of construction, with bray pins and some with elaborate baroque carving. Literary sources from the first half of the 18th century refer to this model as the “Davidsharffe” (King David’s harp). It was the harp played by Petrini, who was the harpist at the court of Frederick the Great.

The early Germany operas and cantatas written by well known German baroque composers as well as dance music were played on this instrument. When played with bray pins it can even hold its own in a full baroque orchestra

German harp from Sondershausen/Thuringia dated around 1700 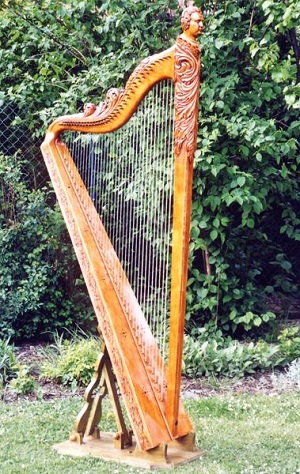 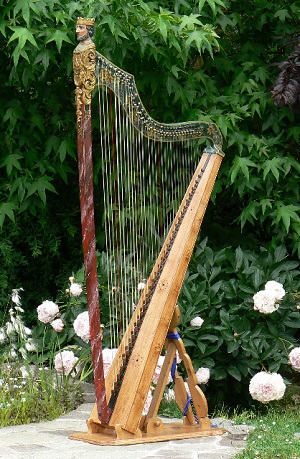 Original preserved in the Museum of Musical Instruments in Copenhagen

Plain, rectangular body with three pairs of sound-holes and bray pins.
Neck and column with elaborate painted marble-effect and carved bust of King David, Apollo or Saint Cecilia, each based on surviving original instruments. 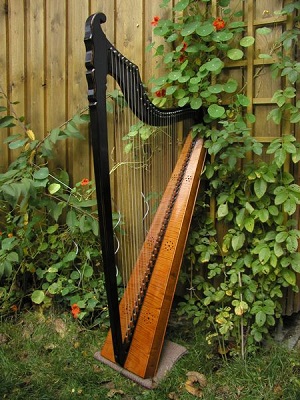 Dimensions according to a harp made by the son of Johann Volckmann Rabe, around 1755.

The French painter P. Mignard produced an illustration of this small double-strung harp around 1691: The detail and precision are testimony to the actual existence of this instrument at that time.

I make this harp with its acanthus leaf decoration and the small torso at the head of the pillar, reproducing this baroque jewel. And, as shown in the painting, the harp can also be supplied with a sling with which to carry it while playing.