The hook harp was the European folk harp and has been preserved in a great variety of models.

The name originates from the simple brass hooks affixed to the neck which were used to produce semitones. Some models of the hook harp also have bray pins.

The last model was the so-called Bohemian harp which was produced almost on an industrial scale. Right up to about 1920 it was to be found in mail-order catalogues in the instrument trade of the so-called “Musician’s Corner” around Markneukirchen in the Thuringian area of Germany.

This harp’s strong, all-purpose sound and light weight have led to its revival in the harp world.

Five different hook harps are available from my workshop.

Eisenach hook harp, from the Bach House in Eisenach, around 1720

I saw this harp in the musical instrument exhibition in the Bach House in Eisenach. Its harmonious shape appealed to me immediately and inspired me to build a reconstruction. The frame is blackened and the corpus is treated with ruby-coloured shellac, making the harp typical of its time. It is one of the few hook harps with harps that can be adjusted from both sides of the neck and which also has brays 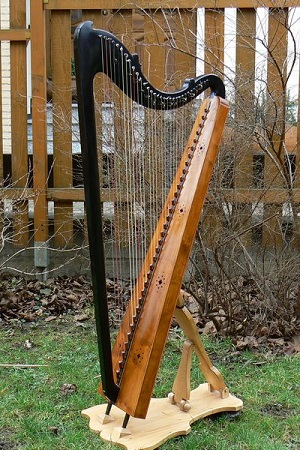 I make this harp with spikes to stand on, as on the original, so it's no problem to play the instrument outdoors as well as indoors. It has a soft, assertive sound which blends very well with the singing voice and stringed instruments. The soundboard is made from maple, making the harp very sturdy. It is easily portable due to its being very light in weight and not tall in height. There is no evidence as to whether the harp ever belonged to the Bach family.

This harp is a reconstruction of a typical instrument from the second half of the 18th century and appears on a painting of Josef Häussler, the so-called Mozart harpist, with his harp. My aim here is to create an instrument for harp-lovers that combines modern technology and distance between strings with an old appearance. The bass and discant sounds of the harp are strong and assertive. This harp is robust and suitable for travelling and for playing indoors and outdoors. 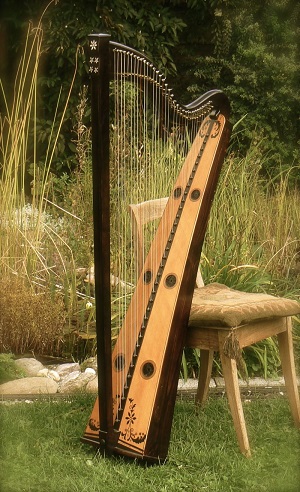 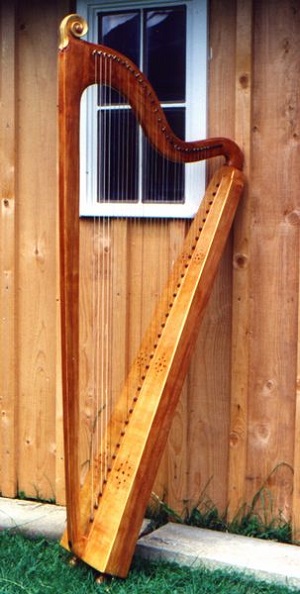 This harp is attributed to Scandinavia and also to Pomerania and Northern Germany. It has a bright descant and long bass strings, so it can assert itself in a dance hall environment. The harps also has a special braying mechanism which allows the player to make all twelve bass strings bray at one time. This gives a distinctive and even more assertive bass sound. The harp is decorated with a beautiful open curl at the top of the pillar and stands on two turned spherical feet. 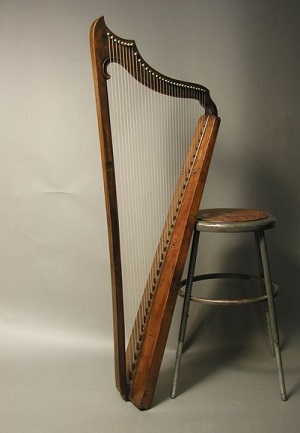 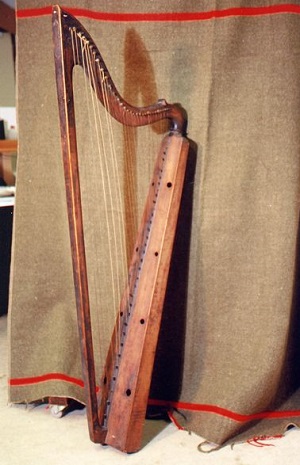 This instrument is presumed to be from Augsburg, around 1730